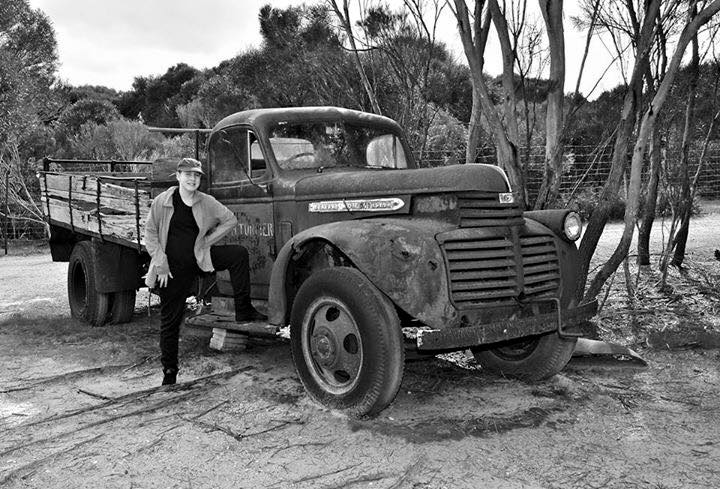 Here’s a wonderful pic of our old GMC truck taken my Michele Williams. I’m sure it’s in many people’s albums, a photographers dream! The truck was origionally purchased and owned by FH Fauldings who used to own our property, once it was sold in 1952 for the soldier settler scheme the truck was purchased by Mr. Randal Turner a local farmer down the road. (No relation just the same same). Once he retired he gave it back to us, to lay to rest where it’s life began. Believe it or not Larry drove it back to Emu Ridge!

We love to share our history here at Emu Ridge. Here’s a short video from when FH Fauldings used to own our farm. This was a documentary produced in the 1930’s. For more history about the Eucalyptus oil industry on Kangaroo Island and Emu Ridge see this link. 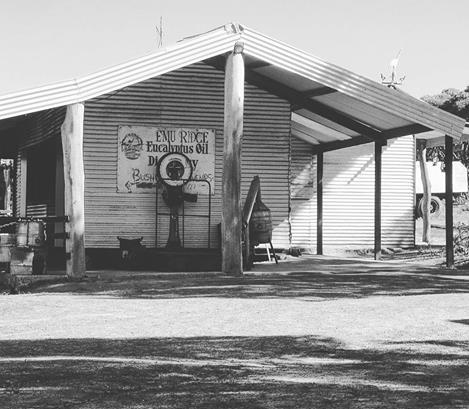 I was having a search on Instagram and came across this great pic of our old eucalyptus oil refining shed. I’m glad I found it because we have more things happening and it doesn’t look like this anymore. Thank you Jordi!

Over the last 25 years we have transformed Emu Ridge from the small post office shop to what it is today. If you would like to see the transformation, you can read about it here. 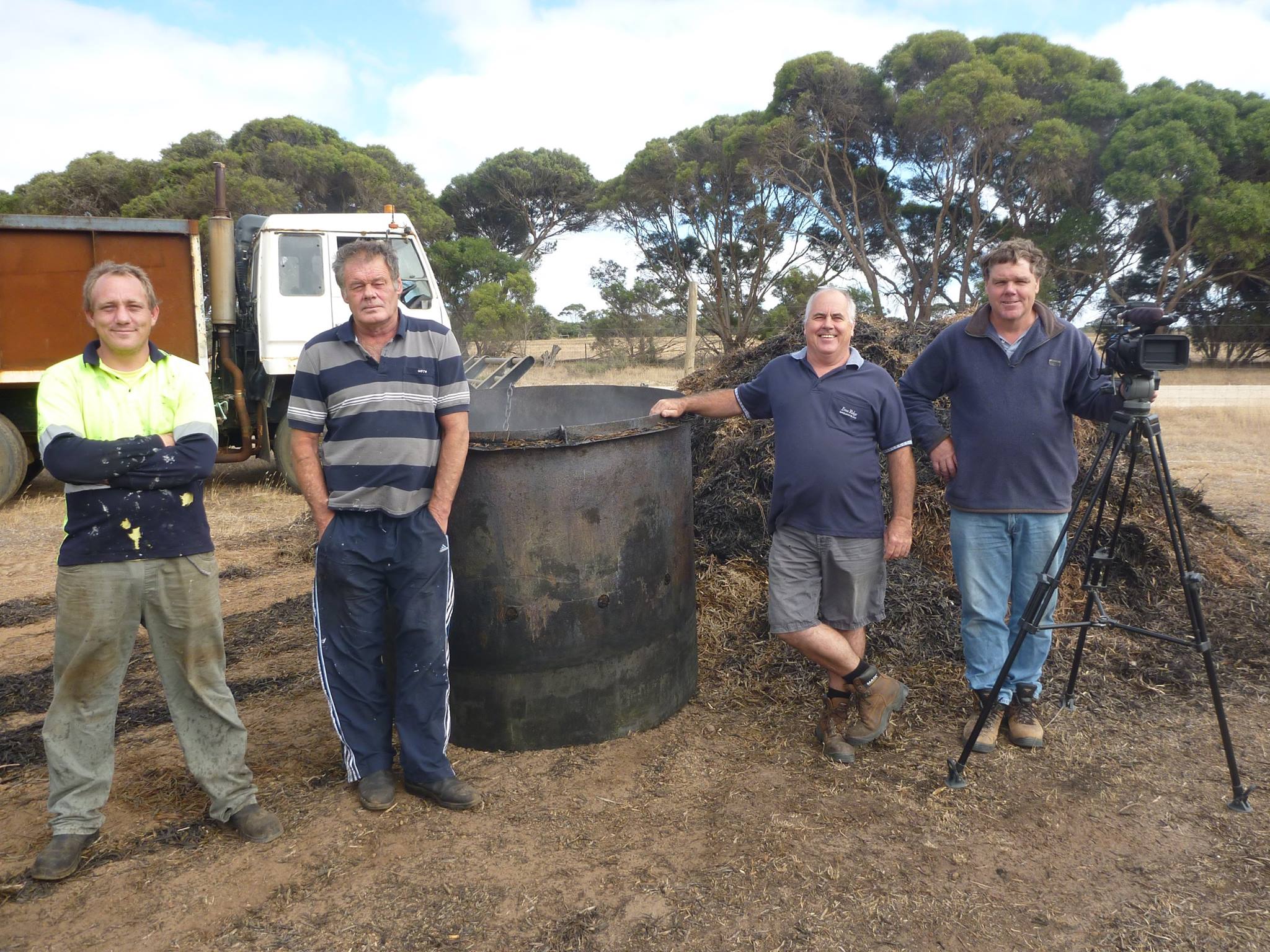 Exciting times! It’s time to update our DVD. Gary Bell from KI Digicam filmed today, so very soon we will be able to show you an updated Video. Gary produced our last video 15 years ago. We have Deon Johnson back working with Larry, and it’s been great to get old employees back. Deon worked with us 13 years ago and is enjoying it being easier work than back then.

The others in the pics from right to left are Gary film producer, Mark Tydeman who has been bottling our oils for 5 years now, and at the moment its all still bottled and labelled by hand. Larry and Deon are on the left. 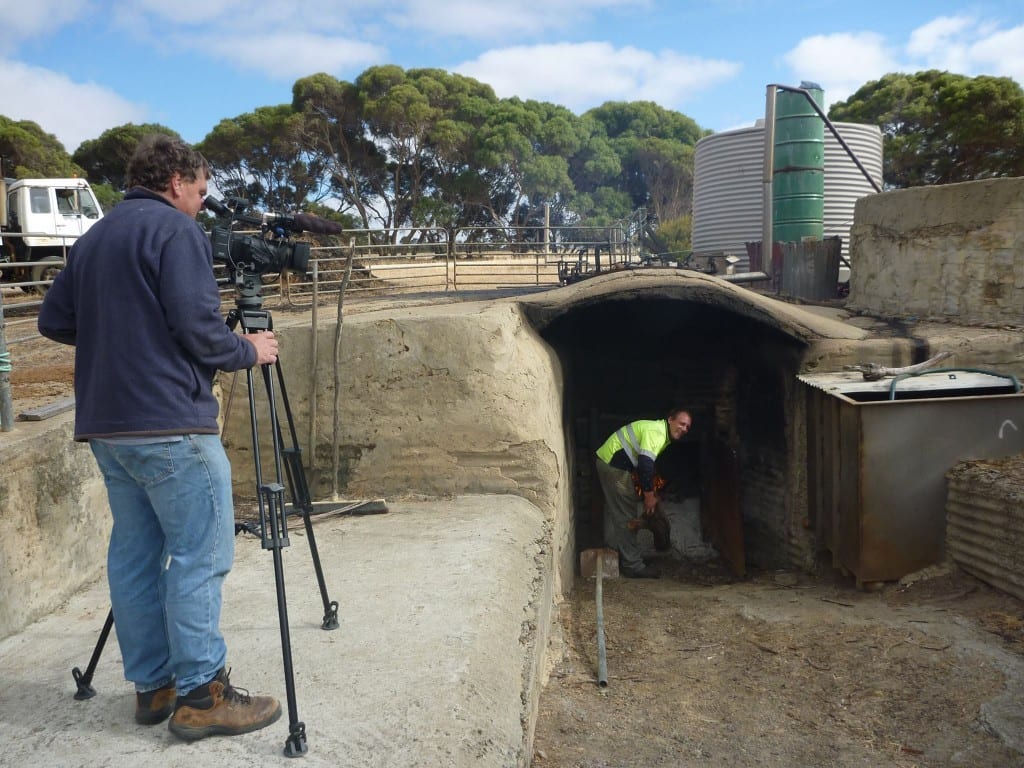 Deon lighting the fire for the camera!

Here is  our original DVD 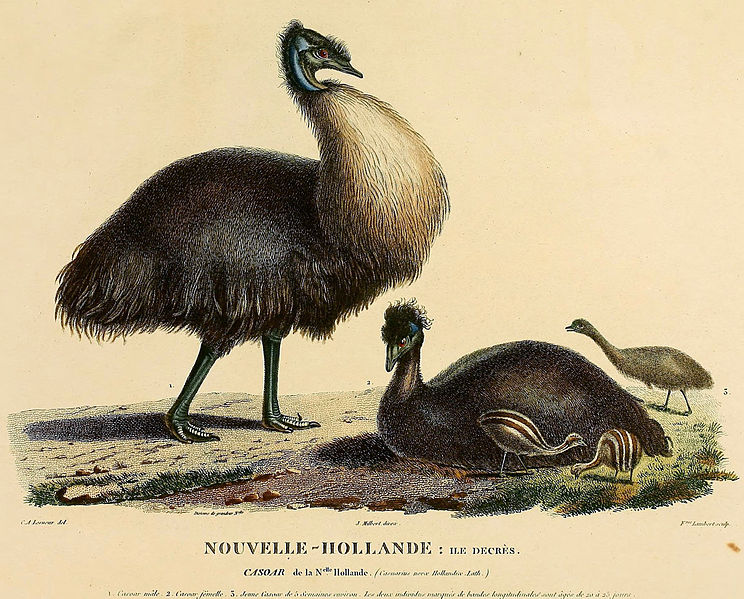 The Kangaroo Island Dwarf Emu, a species of the past

Kangaroo Island once had it’s own native emu Dromaius baudinianus, a very similar species was also found in some parts of Tasmania. Discovered by Matthew Flinders in 1802, the emu was much smaller than those found on the Australian mainland and they were very prevalent on the Island, especially around the areas of Nepean Bay and Emu Bay, named after the dwarf emu.

When Nicolas Baudin came to Kangaroo Island on his expedition, he collected 3 dwarf emus which were taken back to France and survived until 1822. One was preserved for history and was on display in The Louvre in France for many years. Talk was that it was going to be bought back to Kangaroo Island to be displayed at the Tourist Information Centre?

(Conflicting stories, so I will write about both of them. There was no eme in the Louvre but there were two, brought back by Nicolas Baudin, at first in the Chateau de Malmaison (Napoleon’s residence) and then in the Menagerie du Jardin des Plantes.)

The last published record of the species was in 1819, and it was certainly extinct by 1836. The demise of this species is believed to be due to major bush fires and the culling of the emus for food, maybe disease bought by white man as pigs and chickens were bought to the island off of the ships when the first settlers arrived.

Lead author Dr Vicki Thomson is an Australian Research Council Discovery Early Career Research Award Fellow at the University of Adelaide’s School of Biological Sciences believing that “On at least the smaller islands, Kangaroo and King Islands, we know they were hunted by the sealers for food, shot or killed by specially trained dogs.”

Australia’s iconic emu is the only living representative of its genus. The study revealed that the small stature of the now extinct island emus evolved relatively quickly. 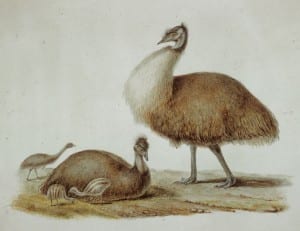 Emu Ridge has its very own mainland emus, they are a mascot to the farm being part of the history. Our farm is called Emu Ridge for a very different reason, not because of the dwarf emu. A company in Adelaide named FH Faulding and Co were famous for their Emu Brand Eucalyptus oil. As farmers were clearing their land for sheep farming, Fauldings eucalyptus oil supply was declining so they purchased our farm, originally called Windy Ridge in 1923 and renamed it after their famous Emu Brand Eucalyptus oil. They planted plantations of  eucalyptus trees to produce more oil and later sold the farm in 1952.

If you would like to know more about our emu and the uses for emu products, have a look at our blog about emu oil, eggs and feathers etc. 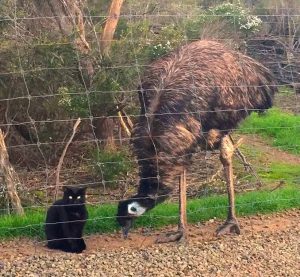 (If you would like to read more about these cute friends, see our blog with the full story) 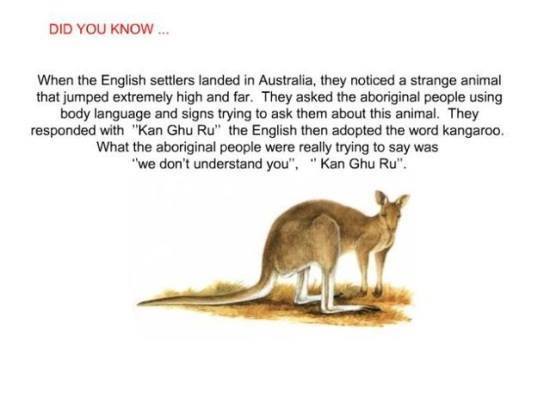 Where did the word “Kangaroo” come from?

I wouldn’t dare say this was true but wouldn’t it be funny if it was! Does anyone know?

Yes, there are kangaroos on the island. The Kangaroo Island kangaroo is a sub-species of the western grey kangaroo, and is native to the island. If you visit us at Emu Ridge you will often find them laying around out the back of our shop, we hand rear orphans and then set them free so they know its a safe place to be and they also invite their friends which is great!

How did Kangaroo Island get its name?

Captain Matthew Flinders, and his hungry crew members, discovered Kangaroo Island on 2 March 1802. They found no inhabitants but were compensated for this by the discovery of what they needed most of all – fresh food! In his journal Flinders recorded, ‘the whole ship’s company was employed this afternoon in the skinning and cleaning of kangaroos. After four months’ privation they stewed half a hundredweight of heads, forequarters and tails down into soup for dinner, on this and the succeeding days, and as much steak given, moreover to both officers and men as they could consume by day and night. In gratitude for so seasonable a supply, I named this south land KANGAROO ISLAND’.

The human history of the island, which started many thousands of years ago, is rich and colourful. At the same time it is also full of suffering, endurance, privation, success, failure, courage and bravery. Its Aboriginal occupation ended about five thousand years ago and was not renewed until the early 1800’s when escaped convicts, from New South Wales and Tasmania, whalers and sealers kidnapped Aboriginal women from the mainland and forced them to live with them on the island. 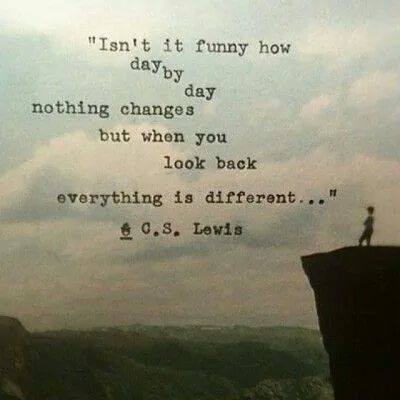 Looking back at Emu Ridge

It’s funny how much this rings true for us and for a lot of people!

We can all go through life working hard and keeping busy. We all get to a point where we need a holiday or a change to break the monotony. It’s so important to look back and reflect on how life has changed. Businesses grow, the kids get older, the house expands. Certainly for us since we opened in 1991 a lot has changed, and we are proud of where we are today 🙂

Don Burke officially opened Emu Ridge in April 1991 and the kids had a ball the distillery was their playground! Wow how things have changed they now  have children on their own! 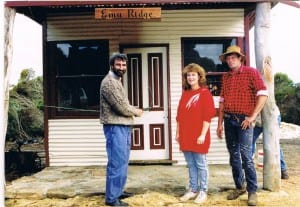 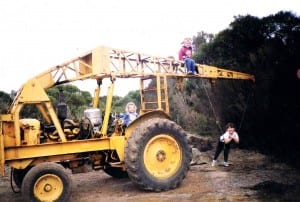 The Turner kids playing on their “playground” 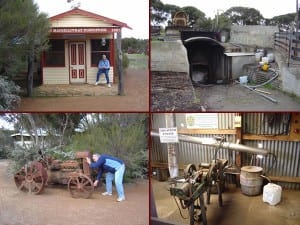 Equipment and machinery – The Still is STILL being used today! 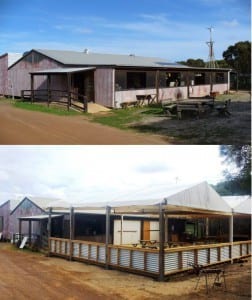 What the Shop and entertaining area looks like today. 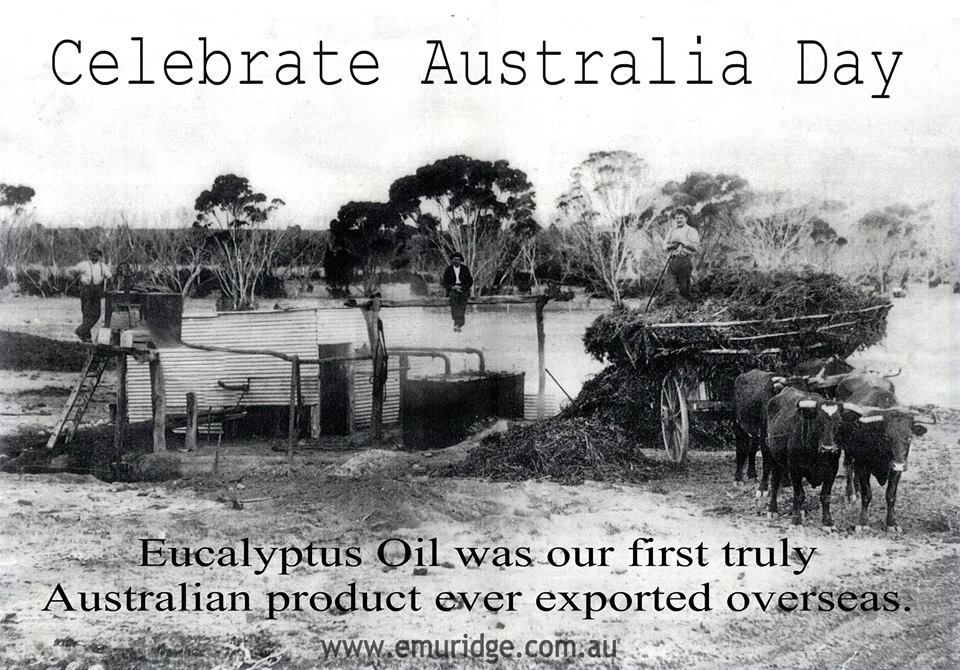 Did you know Eucalyptus oil was Australia’s first true export overseas!  We are proud to have saved Australia and Kangaroo Island’s history and heritage, because today 90% of the worlds oil now comes from China and Brazil! Support one of the last Australian grown Eucalyptus farms and buy your Eucalyptus oil from Emu Ridge! Quick shop link