The Eucalyptus oil distilling industry on Kangaroo Island began in the late 1880’s when it became one of the Island’s major industries along with yacca gumming, timber cutting and possum/wallaby trapping. The Eucalyptus oil industry was mainly located on the eastern end of the Island where the Kangaroo island Narrow Leafed Mallee (Eucalyptus cneorifolia) is found in abundance.

Markin Tilka, along with his wife and children, settled in Australia in around 1880. They first lived in the Adelaide Hills, but later moved to Kangaroo Island due to the abundance of available farming land. Mr Tilka knew the potential for essential oils, due to their popularity throughout Germany and France, so in 1890, Mr Tilka planted three acres of assorted roses near Duck Lagoon, Cygnet River. He spent much money and had high hopes for producing essential oils, carrying out a number of trials with a friend, who happened to be a pharmacist.

Later, Mr Tilka and his grandson, Doug Burgess, started up a eucalyptus distillery near the new plantation, as eucalyptus was much easier to distill and was in great demand. The issue was that the roses needed much care and attention, so the eucalyptus oil industry took over and became the main supplement to their income. Unfortunately, Mr Tilka died in 1914 and with no one willing to carry on his dream, the eucalyptus industry continued to boom, while nothing became of the rose oil industry. The roses were neglected and all had died by 1975. (This information about Martin Tilka and the roses was given to Bev Turner over a phone call with Mr Doug Burgess himself, now deceased. Bev believes that if someone had continued with his dream, it would have bought a lot of wealth to Kangaroo Island, as rose oil is worth 20 times more than Eucalyptus oil).

The number of stills peaked in the 1930’s, with over 100 stills operating on the island, but only half of these operated at any one time because many farmers only operated stills purely to supplement their income. The traditional process of harvesting was hard work, with many long and strenuous hours being spent cutting leaf using razor sharp sickles, then loading it into horse and cart for transportation to the still. 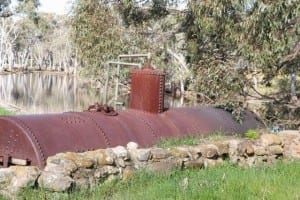 The commercial outlet for the oil produced was F.H. Faulding and Co, who later purchased the property Emu Ridge for the purposes of producing oil. Unfortunately though, the eucalyptus industry was short lived and had rapidly ceased around the 1950’s when wool farming took over.Today Emu Ridge is the only commercial eucalyptus oil distillery in South Australia.

The leaf of the indigenous Kangaroo Island Narrow Leafed Mallee (Eucalyptus cneorifolia) is particularly rich in aromatic oils. The leaf was harvested by hand, using razor sharp sickles, and transported to the still site where it was loaded into a large cooking “pot” which had been one third filled with water. December-January is the best time for getting the maximum amount of oil out of the eucalyptus leaves, however if a hot north wind blows the leaves around, it could reduce the oil content in the leaves by up to 50%.

The leaf was packed into the boiler pots. This involved laying in a good layer of leaf, jumping down into the pot, then jumping up and down on the leaf to compress it down, so that a larger quantity of leaf could fit. The pot lid was then lifted into place using a derrick crane and clamped down and sealed using either hessian bags soaked in water or with mud, which was the more traditional method used in the early years of distilling. 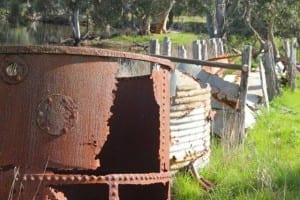 The furnace was lit beneath the pot, boiling the leaves and water for several hours. The steam produced ruptured the oil cells in the leaves and the oil vapor released was condensed into liquid by a system of cooling pipes.

The oil and water separated at condensation in a receival pit. The crude eucalyptus oil, being lighter than water, was skimmed off the top and stored in drums for sale or further distilling. The average amount of oil produced in a day was around 25 liters, as it was a 3 pot still. The leaves in the cooking pot were then taken out and dried for stoking the furnace at a later date.

George Weatherspoon installed the boiler in 1949 to make the extraction process more efficient and easier to run. The boiler was retrieved from another still that had ceased to operate. Along with the boiler, a second pot (the larger one) was installed. A series of underground pipes released steam from the boiler to the two pots. The condensing process began as the vapor moved through a special cooling trough and the crude oil was collected in a tank. The process proved to be more economical and additional leaf could be put in the pots, therefore more oil was produced with each firing.This still continued to produce oil well into the 1950’s. This site is the best preserved example of a traditional eucalyptus still in South Australia. It is a State Heritage Site.

Only crude oil was produced from this still. This was stored in large amounts and then shipped to Adelaide, to F.H. Faulding and Co, where it was then further refined and sold locally, or exported to American, Japan, France and England. 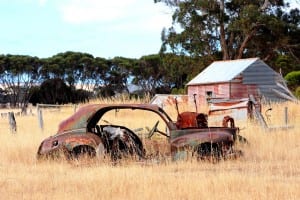